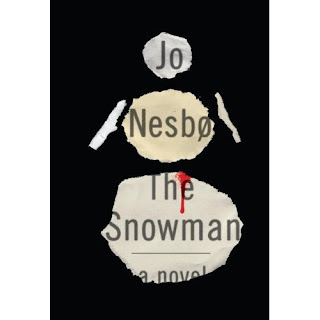 And it's another candidate for "The Next Stieg Larsson!" A thriller set in Norway (all those cold countries are the same setting, really), THE SNOWMAN enthralls when it isn't bogged down in cliche. It opens with possibly the worst sex scene in the history of thrillers, but once that's over, it captivates with the creepy statement from a child: "We're going to die." Unusually for me, especially in a book filled with red herrings, plot twists, and misdirection, I figured out who The Snowman was almost immediately and was unswayed by the multiple times the killer was "caught." I'm not sure if this was a lucky guess that took hold, or if it really is that obvious. At any rate, I enjoyed, for the most part, the unfolding to the reveal. There are excellent moments of creepiness that made me keep turning pages (or, rather, hitting the "next page" button on the Kindle), and Harry Hole skirts the edge of the "alcoholic brilliant detective" cliche carefully enough that I grew to quite like him. What I enjoy about serial killer novels (is that a genre on its own?) is the process of the detectives putting together clues to unravel the mystery, not the point-of-view of the serial killer (yes, yes, you're psychotic and your mother wasn't nice to you...we get it already), so a chapter near the end detailing the killer's rationale and process was so unbearably tedious I mostly skimmed it. I'd rather have the detectives uncover the details than have the killer's actions from childhood summarized for me.

The plot: Harry Hole is about to come up against a serial killer who kills with the first snow, leaving a creepy snowman behind. (I suspect Nesbo is trying to do for Frosty what Stephen King did for clowns.) An examination of missing-women statistics reveals that not all the bodies may have been found. Some of the murders are absurdly complicated, but that's not unusual in serial killer novels. It was an amount of suspension of disbelief I could live with. The wide pool of suspects and the revelation that it is someone with a connection to Harry makes the pages fly by. Even being certain of the killer, I enjoyed the process of Harry and his team chasing down leads to get closer to the truth. Besides a Scandinavian setting, THE SNOWMAN has nothing in common with Stieg Larsson's trilogy. It reminded me more of Michael Connolly or Jonathan Kellerman, but the setting is a compelling part of the novel, almost another character. If you're looking for a summer thriller, this is a decent one overall, with some flickers of brilliance. If you read it, come back and tell me if you guessed the killer. From the Amazon reviews, I'm not sure it's as obvious as I think it is.

Source disclosure: I purchased the Kindle edition of this book.
Posted by allisonmariecat at 6:00 AM

I love knowing the background story of the killers, doesn't make me feel sorry for them but I am interested.

I couldn't get into the Larsson series so I am hoping this is not similar as it is a can't wait to read book for me.

Great review! I loved this book - right from the creepy beginning. I did not guess 'the killer' was the killer. And now that I've read one of the earlier novels, I've learned that Harry has known the killer for quite some time. He/she actually appeared in that earlier novel as a benign character. So, quite clever, I thought...