Altar of Bones by Philip Carter

There are not too many reviews of Altar of Bones out there yet. I'm kind of surprised by this actually. Philip Carter is supposedly a pseudonym for "an internationally renowned author" according to Simon and Schuster's website. It seems to me that it would be promoted more already with less than a month to its release. As Book Faerie at Journey of a Bookseller noted, it does have a Dan Brown feeling to it. While reading I thought to myself that it kind of reminded me of The DaVinci Code minus all the random art historical/historical fact rambling.

Altar of Bones jumps around in the beginning quite a bit, but once you get to the nitty gritty of the story, it's a spy/treasure hunt/suspense thriller based on a Russian folk story. Somewhere deep in the frozen tundra of Siberia there is a frozen lake with a frozen waterfall hiding a cave that legend claims holds the Altar of Bones and a fountain of youth. One particular family, who are descendants of the "magic people" of the area, have passed the secret to the Altar of Bones from mother to daughter for centuries. One woman is known as the Keeper and she must protect the Altar of Bones at all costs. However, these women are tempted by love and the men in their lives tend to prove untrustworthy and only interested in finding the Altar of Bones.

Jump to the present day of the story and Zoe Dmitroff finds herself the most recent Keeper when she receives a letter from her grandmother. She starts on a world-wide journey to unlock family secrets. Along the way, she teams up with an ex-DEA agent named Ry O'Malley. Together the two of them travel to Paris, Budapest, and finally Siberia. All while being hunted by a crazy red-headed femme fatale, an old KGB official, and more. This book is chock full of action with car chases and gun fights with a little romance thrown in by the end. It also tries to offer a new conspiracy theory for a presidential assassination with ties to Hollywood.

All very interesting to ponder. The book was a tiny bit long for me and dragged a bit about 2/3rd in and picked up toward the end again, but overall was a fun read. I kept turning the pages to find out where the adventure took Ry and Zoe next, whether he would eventually double-cross her and what they would do once they finally found the Altar of Bones.

Source disclosure: This was an e-book galley from Simon and Schuster and will be available for purchase March 8, 2011.
Posted by Holly at 7:41 AM No comments:

My friend Amber gave the book blog a Stylish Award! Super nice of her to include us. I think she's pretty stylish herself! She makes AWESOME birthday cakes! I mean seriously, she made Andy's bed from Toy Story as her son's birthday cake. She also makes fabulous jewelry at Links of Love! Check it out if you get a chance! 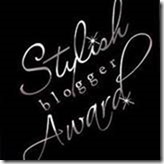 Now onto following the rules of acceptance -

1) Thank and link back to the person who awarded you this award.

7 things you all don't know about me? Hmmmm

So to pass the award along. Here are some pretty stylish ladies that I really admire.

1. Allison at The Whole Ball of Yarn(s)
2. Renee at Our Happenings
3. Kathy at Art Projects for Kids
4. Emily at My Little World
5. DrewB at Momtog
6. Katie at Adventures of an Art Teacher
7. Marce at Tea Time for Marce
8. Girl Detective
9. Charlotte at Charlotte's Web of Books
10. Lenore at Presenting Lenore
Posted by Holly at 7:47 AM No comments:

The Radleys by Matt Haig

MILESTONE ALERT! My last post on here was #600!! 600 posts! That's a lot of book rambling by me and Allison. :-) And we are at 192 subscribers when you combine our Google Reader and Blogger stats. Come on! Get us to 200 subscribers! I think a giveaway might be in the works if we d0 get to 200 subscribers.

Okay with that bit of boasting out of the way, let's get to today's regularly scheduled book review. :-)

Matt Haig's The Radleys is yet another entrant into the literary world of vampires. Let me digress for a moment. Why are vampires so popular these days? Seriously. What is the appeal of these bloodsuckers? Is it because they are supposed to be attractive? I admit, I was not one of those people who got sucked into Twilight. I read the first one and did not read anymore. I have watched the movies though just to see where the story went from there. I have not read any of the Sookie Stackhouse books, nor do I really want to. I have not watched True Blood...in fact, I was never even into Buffy the Vampire Slayer in my younger years. BUT, something about the description of The Radleys appealed to me. I think it was the idea that they were trying NOT to be vampires!

The Radleys lived on an ordinary street in an ordinary village in England. Peter was a doctor, Helen was a stay-at-home mom and an artist, and they had a son named Rowan and a daughter named Clara. They always seemed a little pale and the kids seemed a little strange to their high-school classmates. But other than that, just run-of-the-mill people. HA! They were actually abstaining vampires. Vampires, who didn't want to be vampires anymore! And their kids didn't even know they were vampires. Until Clara decides to become a vegan. The lack of red meat in her diet went against part of the Abstainer's diet and an incident at a party one night turns the family's whole world around. Long ignored family members start appearing and secrets are revealed.

I enjoyed this book for the most part. I think I might have liked it to be a bit more campy and lighthearted. The second half was pretty dark. But overall, Haig made a valiant effort in breaking into the vampire genre. This is a perfect book for a long airplane ride, a beach read, or if you happen to be stuck inside for a snow day with three foot drifts in front of your garage like some people in the Midwest today.

Source disclosure: I received a review copy from the publisher after sending a request from Shelf Awareness.
Posted by Holly at 7:53 AM 1 comment: