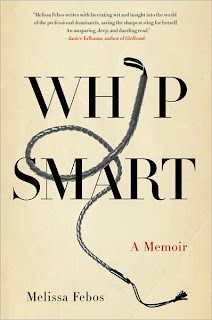 Whip Smart by Melissa Febos: When I heard about this memoir of a professional dominatrix, I was skeptical. I could see a publisher hearing the pitch "It's a memoir that gives a rare look into the world of dominatrices!" and falling all over themselves to sign it, blinded by the potential dollar signs such a sensationalist memoir could bring. I was relieved that Melissa Febos is actually an excellent writer in addition to having a fascinating story. Memoir is not necessarily my favorite genre, particularly memoirs written by young people, who tend not to have the perspective and distance to tell their story in the most insightful way. (Yes, Elizabeth Gilbert, I mean YOU!) Febos is smart, but drops out of high school, moves to New York City, and pursues a degree at the New School. Intrigued by a neighbor who is a professional dominatrix, Febos decides to give it a go; after all, $75 an hour plus tips can buy a lot of heroin and cocaine. I thought she did an excellent job of easing the neophyte into the world of professional domming. Her early sessions are pretty tame, and she doesn't get to the really disturbing stuff until late in the book, at which point it seems almost normal. Febos loves to shock people by telling them what she does for a living and breezily says she has the best acting gig in the city. She constantly distinguishes herself from the other dommes and from other sex workers (she looks down on prostitutes and is quick to draw distinctions between her work and theirs). She's smart, we're reminded. She chose this because she's smart and edgy and cool. But she gets through her sessions high on heroin and cocaine, and though her grades are high, her life is a mess. It becomes clear that while she's dominating men for money, she's the one being dominated; by drugs, by depression, by a growing addiction to domming and being desired by men.

This was a fascinating look at a lifestyle most people never glimpse, and, to a certain extent, it's an interesting look at addiction and recovery. Some of the passages in which Febos discusses her addictions and growing awareness of her problems resonate with truth. However, these are numerous, and her constant justification, sense of entitlement, and navel-gazing got a bit tiresome. A person in therapy is always fascinated by her psyche and the dawning understanding of her thought/emotional processes, but to an outsider who is not being paid to listen, the self-analysis becomes tedious. I also didn't find her particularly likable. She seems to fall into drug use and domming because she's bored. She has a great childhood, no trauma to send her spiraling, a family and friends who care about her, but she's rebelling against something unknown. I kept reading along and thinking that I had a revelation of abuse or trauma coming up, something so horrible I should brace myself, but it eventually dawned on me that there was no precipitating event to her downward spiral. It's almost as though she decided to try everything a person as smart as she is (and we are told often that she is smart) should known better. I could have used a little less self-analysis of her growth and a little more backstory about her emotional state. Really, I didn't put the book down knowing why a perfectly nice girl ends up a heroin addict without any apparent reason.

As a glimpse into the world of professional domming, this book is fascinating. As a journey from depression and addiction to self-awareness, it has its moments of clarity and inspiration. As a memoir...If she had waited ten more years, she might have had the perspective to make this a really great book, but she's too recently healed (and I suspect she's still in the midst of the process, or was at the time she wrote this) to tell her story - at least the triumphant rise from addiction and self-destructive behavior part. Still, it's worth reading if you're curious about professional dommes and their clients, and the moments of insight in her journey back to herself are lovely and thought-provoking.

Source disclosure: I purchased this book.
Posted by allisonmariecat at 6:33 AM