Still in Paris! I read the newest Isabel Spellman book over a month ago, though, so I wanted to schedule a Mystery Monday post for the series, which has become one of my go-to rereading series. For fluffy, fun re-reading, I still go to Janet Evanovich and her Stephanie Plum books, but Izzy Spellman is fresh and funny, but with a more serious edge. And she's good at her job. A little TOO good... 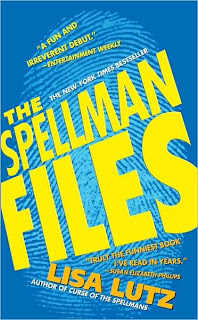 The Spellman Files by Lisa Lutz (Book One): At twenty-eight, Izzy Spellman is comfortable in the family business, a detective agency, where she enjoys surveillance a little too much. And she's not the only one. The Spellmans can't seem to leave their work at the office, spying on each other with every professional resource they have, except for David, the "black sheep" of the family, who has chosen a respectable job as a lawyer. When Izzy's mother hires fourteen-year-old Rae Spellman to follow her sister to find out about Izzy's new boyfriend, Izzy decides she wants out. Her parents agree to let her go...after one more case. An impossible-to-solve fifteen-year-old missing persons case. They're banking on her insatiable curiosity keeping her in the business after the required hours have been put in. Rae, whose hobby of recreational surveillance is more than a little dangerous, disappears, presenting Izzy with the most important case of her life. The dialogue is snappy, the dysfunctional family outrageous, yet believable, and the cast of characters rich and quirky. This is pure fun. 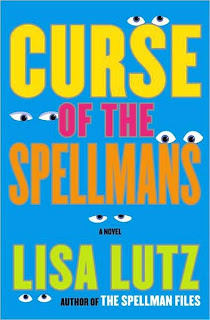 Curse of the Spellmans by Lisa Lutz (Book Two): Izzy is obsessed with the Spellmans' neighbor, who seems just a bit 'off.' She can't seem to leave him alone...despite the restraining order. She's arrested four times in three months, which she writes off as a hazard of the job. It all started when the friend from whom she'd been subletting an apartment showed up in the middle of the night. He's happy to be roomies, but she quickly moves back home. Rae, now fifteen, befriends a cop and great guy, Henry Stone. He really doesn't deserve to be saddled with the Spellmans, but he's so good for them, the reader hopes that he and Izzy will get together. But Izzy is preoccupied with that suspicious neighbor and with her brother David's problems. This is a worthy follow-up to a fantastic debut mystery. 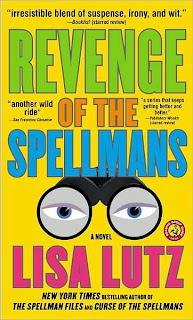 Revenge of the Spellmans by Lisa Lutz (Book Three): This series just gets better and better. Izzy is in court-ordered therapy, Rae is accused of cheating on the PSAT, and a new case seizes Izzy's attention. Ernie Black's wife is probably not having an affair...but something odd is going on. Even after Ernie is satisfied, Izzy can't let go until she uncovers the secret. The transcripts of Izzy's therapy sessions are hilarious - she's a terrible client, but a funny one. Her preoccupation with Henry's annoyingly perfect new girlfriend adds another subplot. Another fun read. 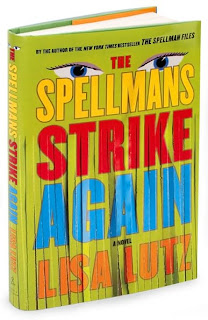 The Spellmans Strike Again by Lisa Lutz (Book Four): I was delighted when Lutz released a fourth book in this series. I can't get enough of Izzy and her crazy family. Unfortunately, this looks like the final entry, but what an entry! Izzy has finally agreed to take over the family business. Her first task is to gather dirt on Rick Harkey, the competition, one she enjoys a bit too much. A mysterious disappearance convinces her to hire an actor friend to play butler in a mansion, a role he can't leave at the end of the day, driving his partner crazy. Rae, now interning by researching pro bono cases, becomes obsessed with freeing a prisoner. And what on earth does Henry Stone mean by hanging around again? A funny, delightful conclusion to a fantastically fun series.

Source disclosure: I purchased all these books.
Posted by allisonmariecat at 6:44 AM