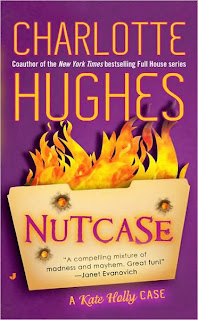 Nutcase by Charlotte Hughes: Just as our thoughts turn to warm summer days (with the snow falling outside, unfortunately), comes a breezy beach read, the sequel to What Looks Like Crazy, which introduced psychologist Kate Holly, lovable, neurotic, and a magnet for trouble. The sequel is no less fun than the first entry in the series, which I would characterize as part cozy mystery, part madcap romance, and all fun. In the second book, Kate is attempting a reconciliation with her firefighter ex-husband Jay, who has his hands full with a serial arsonist and a busty new firefighter at the station. Meanwhile, Kate is being evicted from her office, possibly the only affordable rental space in a neighborhood that doesn't have bars on every window, and she's trying to help a high-profile new patient regain control of her life. While the arson subplot has "Backdraft" written all over it, and a gang subplot is less than compelling, Kate is as fun as ever. Her relationships are more complex than the usual romance novel--she is believably conflicted about Jay: whether to believe that he's faithful or not, how to cope with the danger he's in every day at work, and there's not an annoying love triangle involving Kate's ex-boyfriend, who is still a friend and colleague. Her sidekick, Mona, has her own endearing problems, and the support of Kate's fellow tenants is really sweet. This is a fun entry in a diverting series, and I look forward to reading Hanging by a Thread, the third in the series, next year.

My review of What Looks Like Crazy is right here. 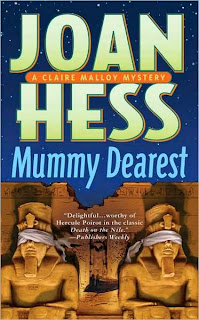 Mummy Dearest by Joan Hess: I've said it many times before, but I'll say it again: I love the Claire Malloy series! This one, set in Egypt on Claire's honeymoon, is a fun homage to the Amelia Peabody novels of Elizabeth Peters. The honeymoon is actually a cover for some "agency" work by Peter, so Claire brings Caron and Inez along for company. Hmmm...Egypt alone, or Egypt with two squabbling teenagers? Tough call. Caron is sullen, Inez spouts facts like a guidebook, and the girls swear they're being followed by a strange man. Claire is left alone more often than she'd like, and the other guests at the hotel (and the staff) are sure Peter is off having an affair. At least Claire gets to visit an archeological site and solve a kidnapping and some murders! Mummy Dearest is #17 in the series, so if you haven't yet spent time with Claire, start with #1, Strangled Prose.
Posted by allisonmariecat at 4:39 AM