I'm cheating a bit for my alliteration: I, Lorelei and Gilda Joyce are really more middle-grade fiction than YA. 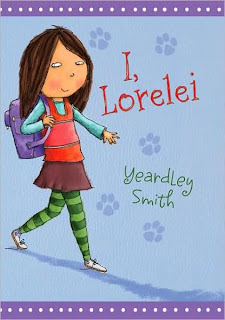 I, Lorelei by Yeardley Smith: Eleven-year-old Lorelei decides to keep a journal, to assist her future biographers, and she decides to address it to her recently deceased cat, Mud. What follows documents a year of ups and downs as Lorelei's parents begin the process of divorcing. In addition, Lorelei is involved in the school play, confronting a bully, befriending a friendless girl, and fighting with her best friend. And maybe even finding a first boyfriend. The journal is sweet and touching, and often hilarious, and I thought Lorelei's voice was authentic enough to carry off the journal format. If not all the loose ends are wrapped up at the end, well, that's how life is. And this difficult year in Lorelei's life is very well told indeed. 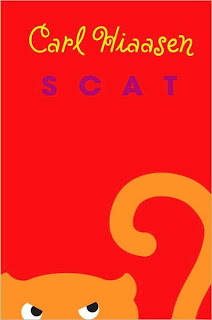 Scat by Carl Hiaasen: The brilliance of Carl Hiaasen is that he manages to take his all-over-the-place, barely contained, hilarious trademark style and adapt it into equally crazy and fun novels for young people. It's like he's had the adult content surgically removed without touching the great characters, wit, and humor he's known for. I loved Hoot and Flush, so it's no surprise I found Scat to be a delight. In this stand-alone novel, Nick's teacher, Mrs. Starch, disappears into the woods when a fire cuts short a field trip...and she doesn't come back out. Nick convinces his friend Marta to look into her disappearance. Throw in panther sightings, a scary classmate (who bites a pencil Mrs. Starch wags in his face, chews it up, and calmly swallows), an odd kidnapping, and a crooked oilman, and you have quite an enjoyable afternoon. The environmental message is very well incorporated into the storyline, so the book isn't preachy in the least, but suggests that a respect for nature is a good thing. Nick and Marta have a sweet friendship, and "Smoke," the scary classmate, is complex and surprising. Another winner from Hiaasen. 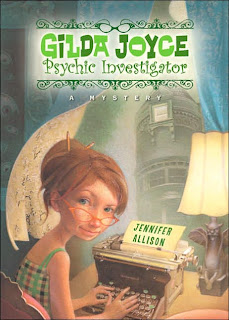 Gilda Joyce, Psychic Investigator by Jennifer Allison: Gilda, a whimsical thirteen-year-old, has decided on a career as a Psychic Investigator. That she's had no psychic experiences to date is not about to stop her, and she is motivated partly by a longing to contact her dead father. Hoping something more interesting than her usual summer at home with her mom and older brother, she manages to invite herself to visit a distant relative in San Francisco. Uncle Lester has a creepy house (complete with a tower from which his sister jumped to her death) and a sullen daughter Gilda's age. Gilda investigates what she is certain was foul play in the death of Aunt Meredith both using traditional methods apparently gleaned from reading Harriet the Spy (hilarious disguises abound) and through "psychic" methods like her Ouija board and automatic writing using her father's trusty old typewriter. Gilda is smart and funny and her struggles with her father's death, her mother's dating, and her best friend's absence (she's off to camp) ring true. Her growing friendship with cousin Juliet (who deals with some serious issues) is lovely, and her investigations hilarious. I will be reading the next adventures of Gilda in Ladies of the Lake and Ghost Sonata.
Posted by allisonmariecat at 3:40 PM

My twelve year old daughter, a HUGE reader, loved Scat. Her reading tastes have "matured" so I wondered if she would still like Carl Haissen's book, but you couldn't get it out of her hands.

We've done all of the Gilda Joyce books - good fun, I mean, come on.

Better for tweens, though, than YA, I agree. Squeezer liked it when she was 11-12, but the upper end of that range was pushing the age of tolerance for girly silliness (now it's silliness focused on boys - which is just SO much better - I cringe in memory of the angst).

I, however, having emerged from YA status by quite a margin, am all about welcoming the silly back with open arms, which made these books lots of fun.