THE BLACK COUNTRY by Alex Grecian

Ah, another Alex Grecian novel! I so enjoyed the first in his Murder Squad series, THE YARD, and I was delighted at the chance to read the follow-up. While THE YARD was a police procedural at the dawn of forensic medicine, THE BLACK COUNTRY is darker, and more of a thriller than a procedural. That said, it was quite entertaining. Inspector Day, Sergeant Hammersmith, and Dr. Kingsley are sent to a coal town in the Midlands, where three villagers are missing. The village, built over the mines, could literally collapse at any moment, making for a dark sense of foreboding over the whole book. Portrayals of Victorian life and coal-mining are gritty and unflinching, with a sense of despair hanging over the whole village. Day and Hammersmith have a charming relationship and Kingsley adds his cutting-edge science to the mix. I had difficulty putting this one down to sleep. Source disclosure: I received a copy of this book courtesy of the publisher.
Posted by allisonmariecat at 10:32 AM No comments:

Allison: So an idea for a book blog name just popped into my head, and since WordPress lets me play on my phone without investing much time and energy, I started a book blog here: Nor Any Drop To Read. I am going to cross-post here for a while before deciding what I want to do, book blog-wise.
Posted by allisonmariecat at 10:10 AM No comments:

THE ABSENCE OF MERCY by John Burley

I could subtitle this review “I was so bored.” The premise was enchanting; the execution, not so much. Dr. Ben Stevenson, pathologist, is a small-town medical examiner, a very undemanding job until the first victim of a serial killer turns up, mutilated, and the second is a friend of his oldest son’s. The killer eventually begins taunting Stevenson, who fears for his family, yadda, yadda, yadda. You might think it is not easy to make a serial killer book boring. I knew I was in trouble when the first pages were from the point-of-view of Unknown Psychopathic Killer. This rarely bodes well in my experience. However, I gave the book the benefit of the doubt and soldiered on. After all, a small-town medical examiner is a favorite premise of mine, and the father struggling with his fears could be a fascinating psychological portrait. Could be. So, here’s where the book lost me. The crazily shifting point-of-view meant I never identified with any of the characters and I wasn’t invested in the outcome to begin with. Clunky foreshadowing and anvil-on-the-head hints meant that I was just waiting for the characters to finally catch up to me (sadly, I was not mistaken when I guessed the outcome early on). When they finally did catch up, the book dragged on for some time for no apparent reason, to an ultimately unsatisfying conclusion. I didn’t even care that the ending was unsatisfying, because, thank the literature gods, the book was over! Source disclosure: I received an advance copy of this book from the publisher.
Posted by allisonmariecat at 10:08 AM No comments: 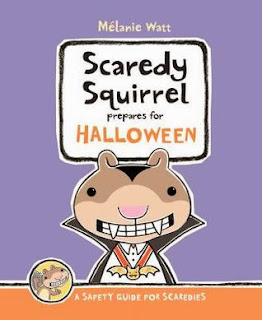 The subtitle for this chapter/picture book is "A Safety Guide for Scaredies." If you're familiar with Scaredy Squirrel (and if you have a young child, you SHOULD be), you'll remember that Scaredy Squirrel is scared of EVERYTHING. Loud noises, surprises, germs. So, naturally, Halloween is TERRIFYING for him. He has put together this handy guide to surviving Halloween; he offers tips on safe trick-or-treating, non-scary costume ideas, a field guide to monsters, and more. The child who is apprehensive about Halloween will adore this tongue-in-cheek guide, and the parent who is apprehensive about Halloween will appreciate Scaredy Squirrel's rules that include having an adult check all candy before eating any. Lilah's comments: Scaredy Squirrel is hilarious. This is a funny guide to Halloween, but he also has some really smart ideas! Like being careful when you cross the street and not using an ax to carve your pumpkin. Mom's comments: I think this is a great book to read to nervous children who aren't sure what to expect with Halloween approaching. My almost-seven-year-old is on the young side for this one, but she still enjoyed it. When she was 3 or 4, it would have been perfect, since she's a bit of a scaredy squirrel herself. Scaredy Squirrel is loads of fun in his more traditional picture books, and he's fun in this "chapter" how-to guide as well. Lilah and I both enjoyed reading it; I just think that it could be a godsend for parents of younger, nervous children, as well as being fun and entertaining. Source disclosure: I received an e-galley of this title courtesy of the publisher.
Posted by allisonmariecat at 6:01 PM No comments: 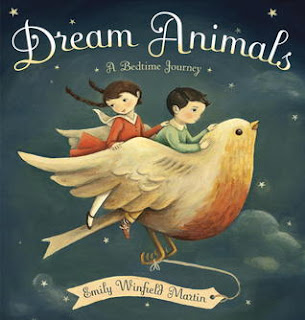 DREAM ANIMALS: A BEDTIME JOURNEY by Emily Winfield Martin: What a sweet, gorgeous picture book destined to be a bedtime classic! Each child's special stuffed animal carries him or her into a magical world of fantastic dreams. Who is your dream animal? the book asks children. The lush, dreamy illustrations are filled with enchanting details. I read this aloud to my six-year-old daughter, and we found it the perfect book to snuggle up with at bedtime. Source disclosure: I received an e-galley of this title courtesy of the publisher.
Posted by allisonmariecat at 6:00 AM 1 comment: 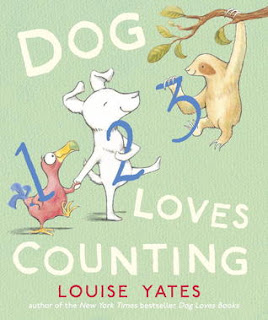 DOG LOVES COUNTING by Louise Yates: Dog cannot fall asleep, though he's tried counting sheep. He decides to try counting other animals, leading to a clever counting adventure (the five-lined skink is the fifth animal he encounters; the nine-banded armadillo the ninth) during which Dog falls asleep and has a fantastic dream about counting. I read this book aloud to my six-year-old daughter, and we found it a sweet and clever bedtime story that doubles as a beginning counting book. Though my daughter is well beyond the learning-to-count age, she was still enchanted by the story. A new classic. Source disclosure: I received an e-galley of this book courtesy of the publisher.
Posted by allisonmariecat at 6:00 AM No comments: 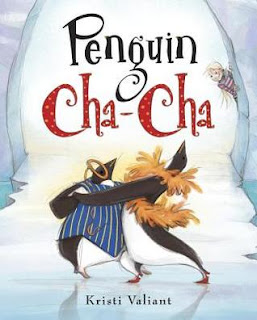 PENGUIN CHA-CHA by Kristi Valiant: A girl named Julia discovers that the penguins at the zoo are brilliant dancers and she dons a penguin disguise in order to join them. They are not fooled, so she tries a different strategy: teaching them the cha-cha. Who can resist the cha-cha? The ending suggests that a future adventure for Julia is in store at the zoo! I read this book aloud to my six-year-old daughter, and we were both cracking up. It's funny and sweet, and Julia's ingenuity and determination are inspiring. The whimsical illustrations capture the grace of...penguins dancing. Highly recommend. Source disclosure: I received an e-galley of this book courtesy of the publisher.
Posted by allisonmariecat at 6:00 AM No comments: 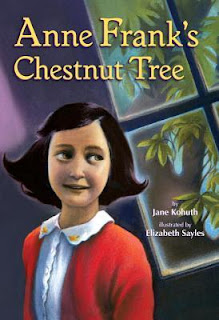 ANNE FRANK'S CHESTNUT TREE by Jane Korhuth: Wow. A Step Into Reading book (billed for grades 1-3) that tackles, in 48 pages, the Anne Frank story. I read this aloud to my six-year-old, and I was impressed. We've talked in a limited way about World War II and the Holocaust, but it's hard to know how to approach these horrors with a child. This story isn't sugar-coated, but it also isn't overly brutal for younger readers. It's overall feeling (though it acknowledges that Anne Frank did not survive the war) is one of hope, focused on the chestnut tree Anne could see from the attic window of the Secret Annex. World War II is simplified to a sentence or two, and the Nazis and the Holocaust are briefly explained. I think for this age group, that makes it manageable for sensitive children. The message is hope, and the story brings Anne to life as a real child. This is a beautifully told story. Source disclosure: I received an e-galley of this title courtesy of the publisher.
Posted by allisonmariecat at 6:00 AM No comments:

THE LAST WORD by Lisa Lutz 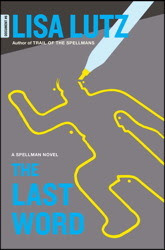 THE LAST WORD by Lisa Lutz: It should come as no surprise that I loved this book; this is one of my absolute favorite series, and Lutz seems to have an unending supply of laugh-out-loud humor, bittersweet insights, and convoluted (this is a good thing!) mysteries. Don't read this one first. Read THE SPELLMAN FILES first. Starting with book 6 would rob you of the satisfying experience of watching Izzy (and her family) evolve. Isabel Spellman was raised in a family of private investigators, so it's no surprise she has trust issues and an interesting approach to privacy. It's challenging to sum up the plot for THE LAST WORD without giving away major developments in the first five books. Let's see: Izzy is accused of embezzlement, she and her parents are engaged in open warfare, Rae is up to something that involves a truck full of tear gas, and Izzy's niece is a holy terror. All of this is wrapped up in a witty, sarcastic, plot-twisting package tied with a sentimental bow, and I loved every second of it. If you enjoy smart, snappy writing, tight mysteries with a witty twist, or complex, believable female protagonists, give THE SPELLMAN FILES a go. I was hooked from the first word. Source disclosure: I received an e-galley of this title courtesy of the publisher.
Posted by allisonmariecat at 6:00 AM No comments: